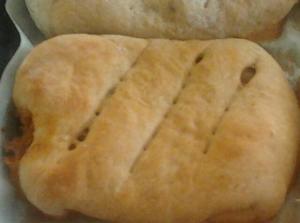 Hubby has had a craving for red meat. I very seldom share meat recipes because I don’t make meat dishes that often. Not because I am a vegetarian. Non-meat dishes are just more convenient for me to make but I am always willing to bend over backwards for people I love and care about. I honored Hubby’s request for a beef dish by making homemade meat pockets for him which he immensely enjoyed. Since I am about to go meatless for the next 9 days, I thought it would be appropriate to share my meat pockets pie recipe for this one last time (at least for a while).

It is a Jewish custom not to eat meat or drink wine among other things in the 9 days leading up to Tisha B’av – anniversary of the destruction of both temples as well as numerous tragedies that followed.  I may not be a vegetarian but I never complained about forgoing meat for a couple a days. In fact, I found it somewhat to be relieving. While I don’t eat meat as often as I used to, I do make special exceptions. Having overused ground beef for Shepherd’s Pie, Sloppy Joe’s, and burgers, I was in need of a different option and I settled on meat pocket pies.

Learning to cook meat pockets was not much different than making meat knishes or calzones. The concept and techniques are similar. They consist of a meat filling and a bread exterior. Only this time, I infused some  Mediterranean flavors in these homemade meat pocket pies.  As far as filling options are concerned, the sky is the limit. You can pull your own twist. I know many of you are not heavy meat eaters so a vegan option  is always available to you. Just simply swap the meat for the vegan version and you will still get a satisfying and flavorful meat pocket pie – a meatless dinner idea I would consider for the next 9 days.

For this recipe, you will need:

Follow instructions for pizza dough recipe. Divide dough into 6-8 pieces. Heat 2 tablespoons of vegetable or olive oil in a skillet over medium heat. Add chopped onions and saute till translucent. Add minced garlic and saute for another 2 minutes. Add the vegetables and cook till tender. Stir in the ground beef and cook till browned and crumbly. Drain excess fat from the pan and stir in spices, salt, pepper, and crushed tomatoes. Bring to a simmer, cover, and cook until the liquid has evaporated.

Line baking sheets with parchment paper.  Roll out dough pieces into discs. Fill each disc evenly with beef mixture in the center. Seal dough with opposite ends.  Arrange on baking sheets. Allow them to rise for 20 minutes or until double the size. Preheat oven to 400 degrees F.  Bake until golden brown and hot on the inside, about 25 minutes.